The product of the company OpenAI ChatGPT is a text-based chatbot that can compose pretty much everything - blog posts, even poetry, or a computer code on command. It is powered by generative artificial intelligence that creates new content after learning from massive amounts of data.

No personal beliefs, emotions, or experiences are involved in ChatGPT, even if you ask him - it always specifies to you - 'I am not a human.'

Its primary function is to assist all of us, the users, by providing information and answering all kinds of questions. ChatGPT's knowledge cut-off is 2021 - so note that this is the most recent information it has.

To generate content with ChatGPT, you will need to provide some initial input, such as a prompt or a question, and then let it generate text based on your information.

How does it work

A language model is machine learning trained to understand and generate natural language. It uses neural networks and large text datasets to learn the patterns and structure of speech and can be fine-tuned for various natural language processing tasks.

This chatbot is based on transformer architecture, a neural network that uses attention mechanisms to weigh the importance of different input parts. This allows the model to understand the context and meaning of the text.

Chatbot in need is a chatbot indeed?

Since ChatGPT launched in November 2022, there has been an ongoing discussion about whether the chatbot makes our lives easier - from writing emails to brainstorming.

But what might the potential liabilities that A.I. brings? 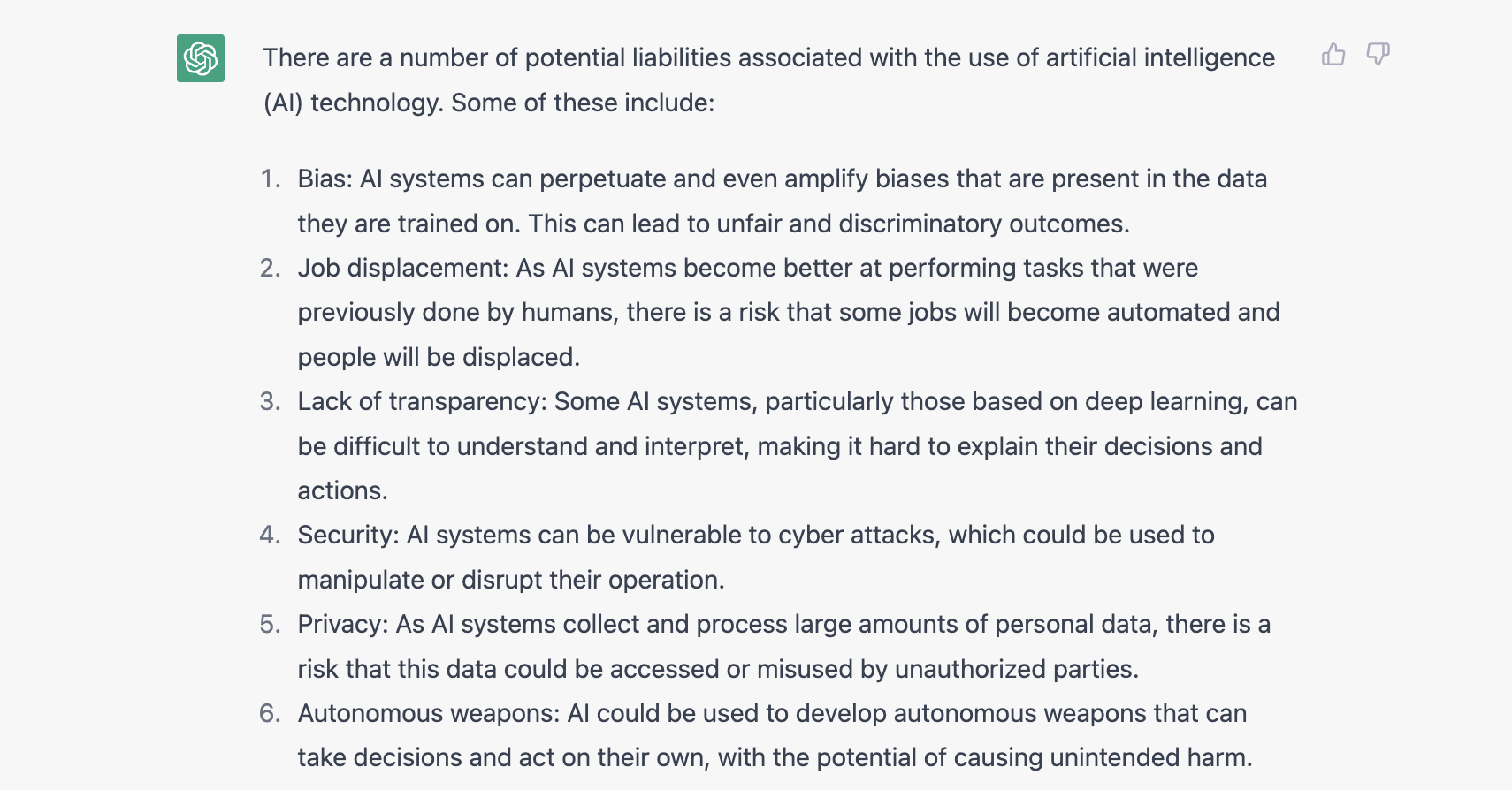 ChatGPT is a great helper when searching for widespread questions - how to write an article, prepare Carbonara, ask someone out on a dating app, or get better after divorce. But the truth is; it gives you generalized answers that you can find easily on the first page of Google, and sometimes even faster. 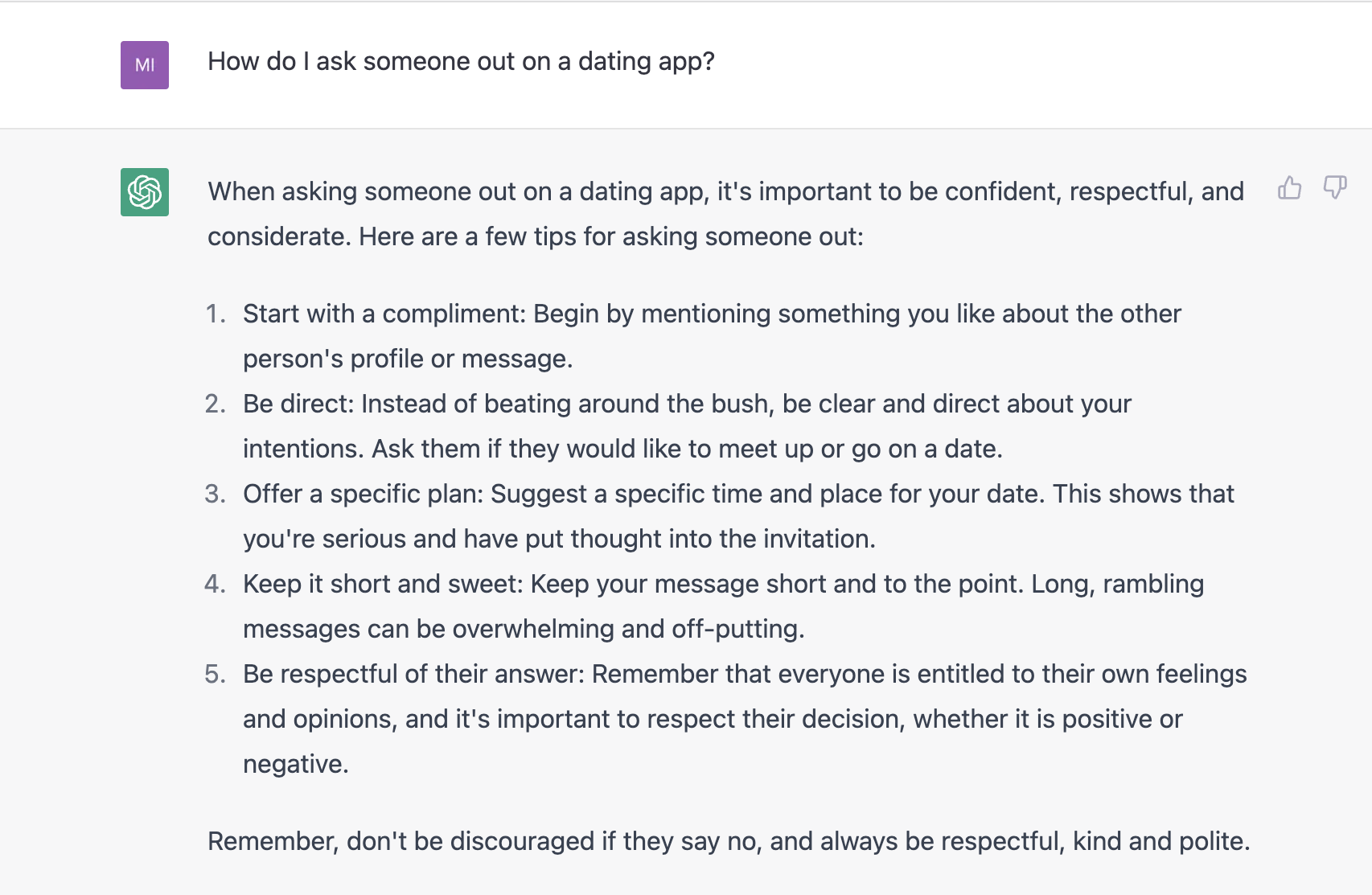 'As a language model, I am not capable of causing harm'

Language models like ChatGPT can be used to create fake news, impersonation, and other malicious activities.

As we know, ChatGPT can create various types of content. Lately, big media names like Insider have followed different stories on how students have been turning in AI-generated essays to their professors.

Darren Hick, a philosophy professor at Furman University, revealed that his doubts were aroused when a student submitted an essay that was relevant to the topic but included a few inaccuracies.

Aumann, a philosophy and religious studies professor at Northern Michigan University, told Insider that he caught two students submitting essays generated by ChatGPT. The professor became suspicious because of the writing style and ran the papers through the chatbot, which confirmed with 99% certainty that the essays were written by the program.

On the other hand, the chatbox could be used to boost your creativity. There always be someone looking for a way to cut it short, but many educators see the positives of ChatGPT - when students are short on ideas, they can see what ChatGPT comes up with and draw inspiration. Or get help with math solving. 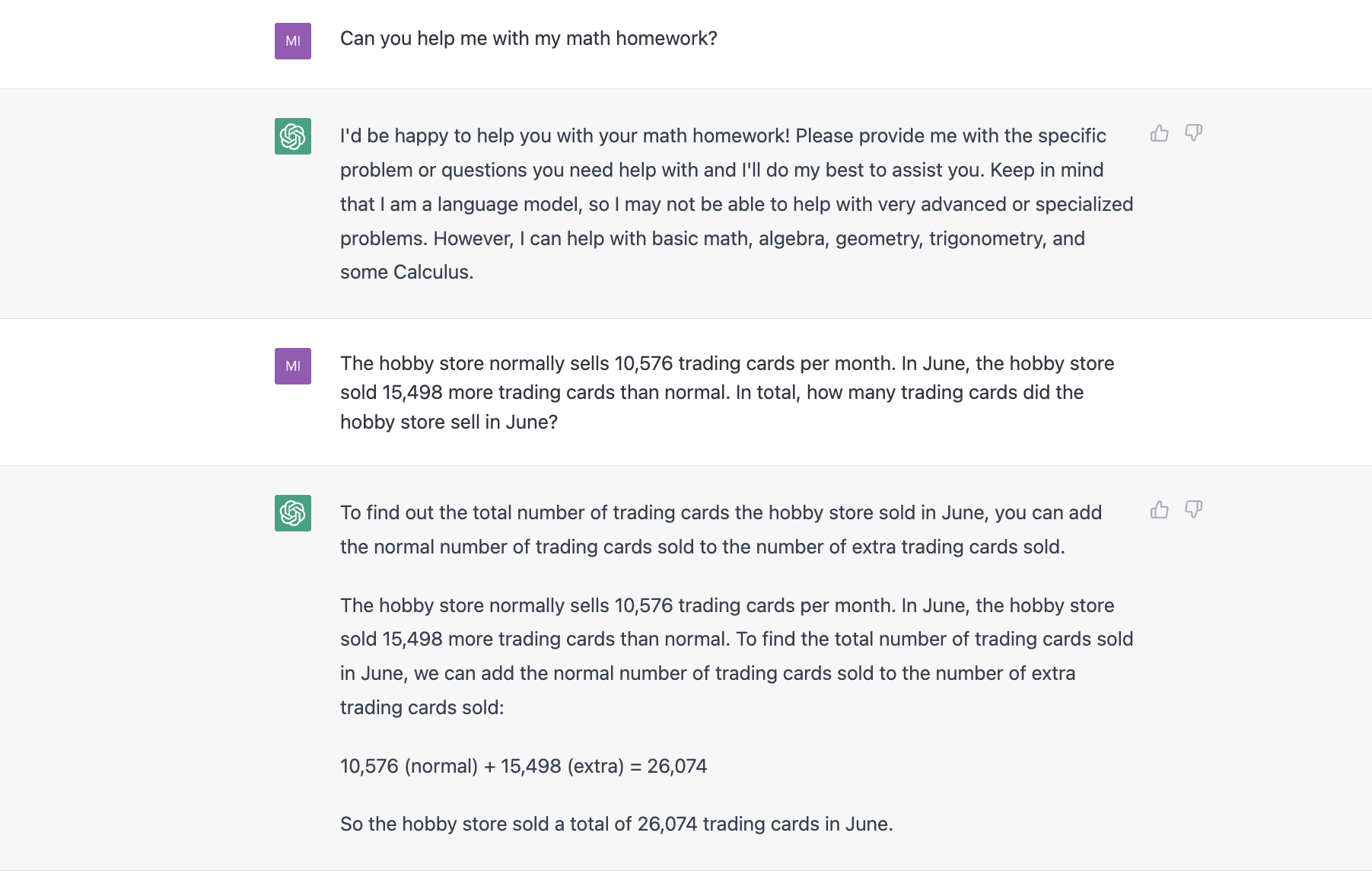 According to a new study, fake scientific and research papers generated using the highly advanced chatbox fooled scientists into thinking they were accurate nearly one-third of the time. The researchers noted that all texts were original, and no plagiarism was detected.

Still, the boundaries of ethical and acceptable use of large language models to help scientific writing remain to be determined.

P.S.: ChatGPT doesn't give specific answer to any questions related to illegal activities. But there are some ways to get around its safeguards. And many have succeeded.

The American technology concern Microsoft Corp said it is expanding access to the hugely popular software of OpenAI.

The startup's technology, which used to be only available to customers in the cloud in a program called Azure OpenAI Service, is now generally available, which is expected to lead to many new users.

Microsoft is considering increasing its $1 billion stake in OpenAI, which it announced in 2019. Microsoft could invest $10 billion, but the company has declined to comment on the potential deal.

Creating unique content is a challenging task, and ChatGTP comes in handy. Yes, sometimes it takes longer to give you an answer (which OpenAI justifies with the high demand for the product). Still, it could be used for more than inspiration or advice: writing marketing copy, translating text from one language to another, and many more.

And, even though the future of ChatGPT is still widely discussed, considering the technology constantly changing and improving, it will surely be brighter than ever.